Home » Board Games » What is Monster Of The Week?
Board Games

What is Monster Of The Week?

More often than not, with games like D&D and Pathfinder, they can become a little too repetitive with the number-crunching and constant ability checks. Whenever I play D&D and the party is traveling to a new city, there’s only so many times I can hear “make a survival check” before I start to wonder if anything worthwhile is going to happen. However, when it comes to Monster of the Week, everything becomes worthwhile. So, what is Monster of the Week?

It’s not dice-heavy for the players so no d20s, and the dm, or Keeper as they call it, doesn’t even need dice. The game is easy to run and has, in my opinion, easy character creation.

Monster of the Week Game Mechanics

Role Play situations aside as a hunter, your job is to do just that, hunt down the monster. However, you need to understand the basic moves of the game, which are the following: In addition to the basic moves that every hunter has, each hunter gets to choose their own set of moves from their class or playbook as the game calls it. There is a wide variety of playbooks that you can choose from, including some more online.

When it comes to stats, you get to choose a set whenever you create a character sheet, and each hunter has their own set of ratings on a scale of -1 to +3. They roll 2d6s and add the number rating to the move. The ratings correlate to the following stats that every hunter gets: Cool, Tough, Charm, Sharp, and Weird. To look at playbooks and character sheets, and more you can visit here.

Roleplaying in Monster of the Week is a truly unique experience. As a player myself, sometimes certain playbooks can’t help but do bad things. For example, if you play the playbook The Monstrous, you have to choose a curse, like feeding on living humans. That could create conflict in your party if they give to temptation, which in turn could affect the mystery.

Everything you do as hunters will cause a reaction, especially if you fail a move. When rolling a miss, something terrible will happen to you or to someone else as a consequence of what you did. It’s not all bad, though whenever you miss, you get to take an experience point. You literally learn from your mistakes! If you are a Dungeon Master like me, you know keeping an eye on player shenanigans while trying to make things happen behind the scenes can be tough work. As a Keeper, the only details you should have set out are about the Mystery.

This is an improvisational game, meaning you can’t plan ahead. As the Keeper, your biggest job is to react to whatever the hunters do. They get to choose where they want to go, who they want to talk to, and how they track down the monster. In other words, no railroading the game. Let the hunters do what they want and react off of what they do.

What the players roll in a game will help you out in that aspect. For example, when a player wants to do something like chase a monster, they’ll have to act under pressure to do so. They roll plus cool, and if they get a 10 or above, they set out what they accomplished. On a 7-9, you get to give them a hard choice (the worst outcome) or price to pay depending on the situation, and on a 0-6, you get to take a hard move.

As a keeper, you don’t necessarily get moves like the hunter. You get to create the monster they hunt down, its minions if it has any, and any special abilities they might have. However, outside of that as a keeper, you get soft moves and hard moves. A soft move is something that implicates a possible danger and gives the hunters something to react to.

A hard move is something you respond to if the hunter fails on a roll, meaning the hunter doesn’t get a chance to react to the danger. Typically you want to use soft moves that can set up potential hard moves.

When creating a mystery for your players, the first thing you should think about is the tone you want to set for the game. How dark do you want the game? Will it be taking place in a big city or a small town? How will the world look to the hunters?

It may seem hard to come up with it all by yourself, but the great thing about this game is you get to work with the hunters on creating the scene. For instance, in my game, my character wanted to go to a small-town diner to lay low, and the keeper made the diner into existence. When creating your mystery, you want to make it basic. So give your monster or someone who may be using the monster a goal. Then you want a hook that will grab the hunter’s attention, use the monster to attempt to kill the hunters or try to get them out of the way by using minions or bystanders. A good rule of thumb is to ask yourself what would happen if the hunters didn’t intervene and play the game like that until they do.

At the end of the day, remember that above all this is a game about the Hunters, not the mysteries. So don’t make it too hard. We want to see the Hunters make mistakes and choose hard choices, as the keeper you get to play out all the consequences, that’s what makes the game fun to run! 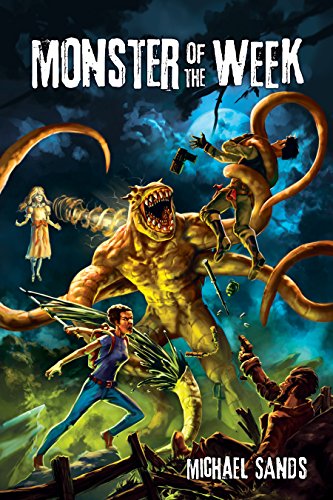 Can you multiclass in the game like in D&D or Pathfinder?

Yes! Upon leveling up, you get to choose from a variety of options for your character; one of those options can be to take a move from another playbook. That’s not all though, once you level up five times, you get advanced options like changing your playbook to another, and you get to keep some of the moves from your previous playbook!

Is it easy for a hunter to die? Absolutely! One of the hardest parts of playing the hunter is keeping your character alive. There’s even an option when leveling up to create a second hunter to play. There’s some stuff you just can’t come back from, say someone is about to shoot you and you fail the roll, the hard move the keeper takes on you may just be that you die.

How does Magic work in the game?

Moves like to act under pressure, and use magic is basically catch-alls. Depending on your class like the spell slinger, magic could be a destructive force with some weird side effects, but with the spooky magic is nothing but weird side effects. With magic, it’s important to tell the keeper what you are trying to achieve and roll + weird he will then tell you what happens depending on the roll.

What are the Benefits of Role-Playing Games? [From a Player’s Perspective]

What is Homebrew D&D?