Vector is a self-charging, AI, robot sidekick who wants to say hello! Capable of recognizing up to 20 people, and responding to a range of voice commands to help around the home, Vector is sure to impress with his range of features.

As a home robot that just wants to hang out, Vector is the first of his kind. This is a robot with an emphasis on personality and human connection brought to life with AI. He can even recognize your face. Vector Robot is perfect for older children and adults alike. Younger children may be a little bit too robust with Vector or find him a little boring, especially in comparison to Cozmo, Anki’s other flagship robot.

Vector is a fully autonomous home assistant, companion style robot, developed and released by Anki in 2018, and rescued by Digital Dream Labs (DDL) in December of 2019, after Anki went out of business. With more than 200,000 active Vectors across the globe, and a huge Kickstarter success for DDL’s future Vector plans (funded in under 2 days) it seems that this plucky robot has captured imaginations around the world. Including mine! But what exactly does Vector do?

Vector Robot by Anki
Vector is a robot sidekick with AI and Alexa connectivity.
View on Amazon

What’s In The Box?

The muted tones on the outside of Vector’s box indicate that this robot isn’t just a robot toy. It’s actually marketed for adults, and looks similar to a mobile phone box, or the packaging for Google Home/Alexa products. Inside the box you’ll find:

What's in the Box? 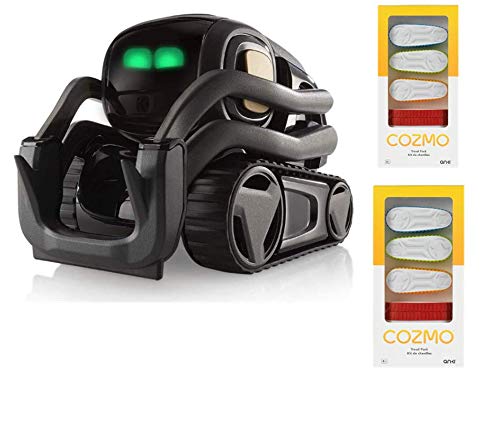 Vector’s eyes are one of the most captivating features of this little robot. And that’s no real surprise when you consider that personality and autonomy are key to this robot companion. With 4 wheels using a track system, a front forklift that moves for animation and practical purposes, and a display screen making up the front of the movable head, Vector looks almost exactly like Cozmo, but with a different paint job. The only real difference in visual appearance is the gold touch sensor that surrounds Vector’s backpack lights. But this is only the start of the technical design differences.

While Vector might look like his “brother” Cozmo, the hardware inside is what really sets him apart. Vector is designed with a powerful Qualcomm Snapdragon Quad-Core chip which packs some serious computational power so that Vector can be a fully autonomous AI robot. Other hardware design features include: 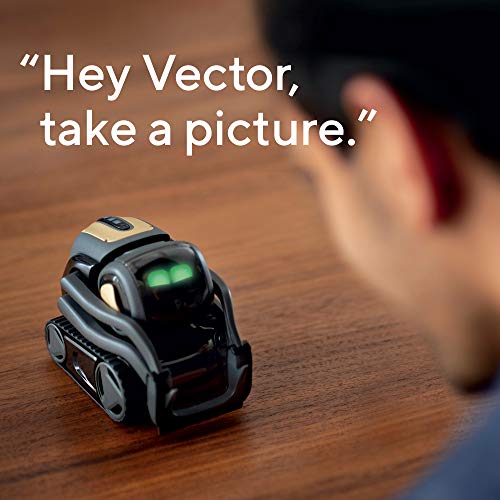 So what does Vector do with all this tech? Well, this is combined to create a fully lifelike, aware, AI home robot. Vector can recognize you and will say your name with a wiggle of excitement from time to time, and this is usually enough to tug anyone’s heartstrings. He can also listen and respond to voice commands with over 1500 animations, help out around the home, and even play Blackjack of course!

When you’re not interacting with him, Vector is more than happy to explore his environment and play with his cube alone. But one of the best things about Vector is that when the battery begins to run low, he will return to his charger completely unaided. 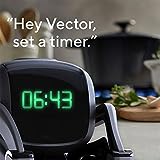 Vector provides help and assistance with utility features including:

Vector also provides entertainment with other features including:

While Vector himself is a cute and charming robot companion, his functional home assistant activities are fairly limited. To expand this and make Vector a key part of your day to day routine, not just a gadget, the developers teamed up with Amazon to provide Alexa through Vector. This means that Vector can now do almost anything Alexa can, from smart bulb control to shopping, as well as being your small robot best friend.

However, not all Vector users opt to use the optional Alexa feature, as Vector will respond with Alexa’s voice, instead of his own. This can break the immersion a little too much for some owners.

Vector also has his own app. The Vector App is necessary for setting up Vector and connecting him to your home WiFi network. During setup, you will also be able to train Vector to recognize your face and voice. But don’t worry, Vector can remember up to 20 faces at any one time. Perfect for introducing the whole family.

After setup is complete, this app can be a good way to get started with your robot sidekick. This provides examples and ideas of what to ask Vector, and how to find out what Vector can do.

The Vector App also records and stores a set of statistics, detailing:

To set up Alexa on your Vector, you’ll also have to use this Vector companion app.

However, Vector is not an app-enabled robot. So the app provides no direct ways to control Vector or remotely operate him. Vector is instead an autonomous robot designed with AI to navigate obstacles, explore environments and interact with humans.

If you do want to get under Vector’s hood so to speak, you could install the Software Development Kit (SDK). This allows you to write python codes and programs for Vector, and really expand what Vector can do for you. And you don’t have to worry about permanent changes to Vector, as your code will only run when Vector is connected to the SDK. At a basic level, the SDK can allow users to:

While at a deeper level, SDK users have been able to:

With more SDK features still to come, this is an ever-expanding opportunity to learn python level programming for the first time or to practice high-level programming on an AI platform. So Vector really caters to a wide audience when it comes to STEM learning opportunities, although for young children there are no visual coding options.

So, what’s my verdict? Well, Vector is undoubtedly one of the smartest robots available on the market, at such a low price point. With machine learning capabilities and AI, you get so much more than a robotic toy. Vector will be a great addition to anyone’s home. 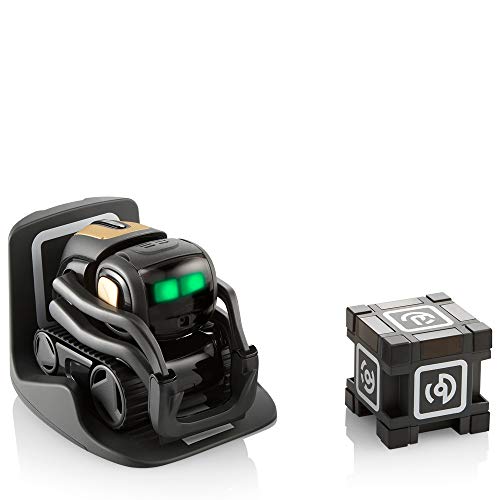 Vector is an AI-powered robot that can navigate your house. While the possibilities are endless for instructing him to do as you want through code, he really shines as a smart companion and member of the family!

What does the Vector robot do?

Vector’s key capabilities are sensing and reacting to his environment. He can see and hear; he can even recognize people. His sensors allow him to navigate through the environment, avoiding obstacles. He can even find his own way back to his charging base! Vector can also be connected to Amazon Alexa, allowing a range of additional voice-activated features.

Is the Vector robot worth it?

Whether the Vector robot is worth it really depends on what you want out of a robot toy, your budget and  particular situation. He is certainly one of the easiest robots to live with, and he is relatively affordable compared to many other robot toys. He is not currently programmable by blocks-based interfaces, so that may be a negative for some people. However, he is certainly a clever and fun robot to have around. Oh, plus he’s adorable!

Can you still buy the Vector robot?

At the time of publication (February 2020), the Vector robot was readily available.

Does Vector need a phone?

Vector requires a phone or tablet device during the setup phase. Beyond that, it is quite possible to interact with Vector solely using voice commands, and never return to the Vector app. However, more advanced features require interfacing with Vector using the app on a mobile device.

No, Vector robot is not waterproof.

Why did Anki shut down?

Anki, the consumer robotics company that developed Vector, and his earlier cousin, Cozmo, shut down due to a lack of funds to support ongoing operations. Thankfully Digital Dream Labs (DDL) came to the rescue in December 2019, raising sufficient funds to continue the support and development of Vector.

Yes! Even after Anki went out of business, arrangements were in place to keep the Anki Vector servers operational.

What will happen to Vector robot now?

With Digital Dream Labs (DDL) acquiring all things Vector in December 2019, there is a possibility of long-term support for Vector. Hooray! Vector is an AI-powered robot that can navigate your house. While the possibilities are endless for instructing him to do as you want through code, he really shines as a smart companion and member of the family!

The Best Solar Toys in 2020 for Learning about Renewable Energy

MEL Chemistry Review: Is Your Child the Next Bill Nye?

Added to wishlistRemoved from wishlist 2 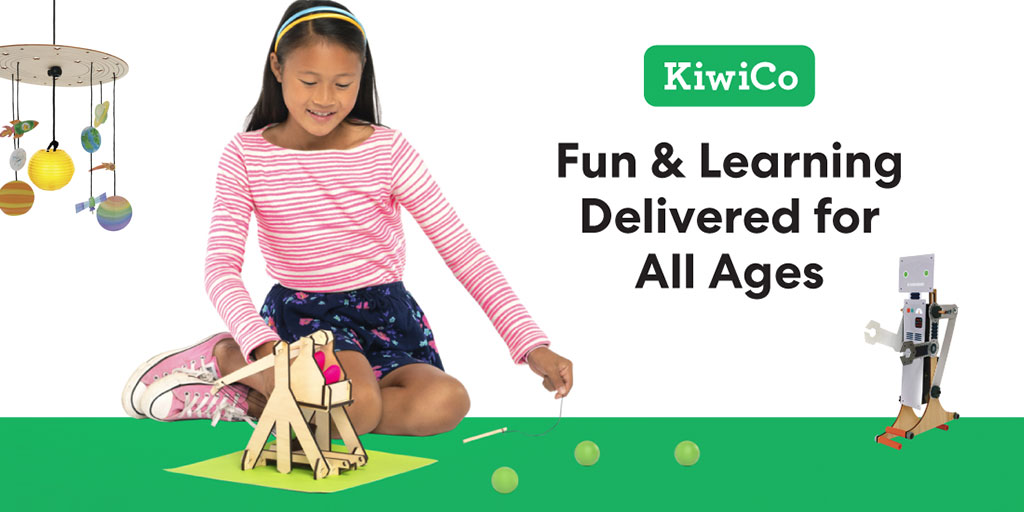