Years on, I still have pleasant memories of the science projects and homework I was assigned as a student – thoroughly enjoying the more creative aspects of the STEM subjects. Learning by doing is not only memorable but also very important in the processing of information. This way, the newly acquired knowledge can be put into perspective and some of the applications can be shown. Chemistry is all around us, lending itself easily to experimentation and creativity. Here I’ll try to throw together some ideas around STEM projects for high school chemistry, and hopefully inspire you to get your students and kids involved in more chemistry projects going forward.

Projects Are More Than Just Experiments

Students in high school have contact with only a fraction of what the field has to offer, quite rightly learning basics before they can move on to more complex information and other areas. However, I feel it’s still important to expose students to more advanced ideas and show them that chemistry is more than learning molecular formulas and synthesizing stuff in the lab.

Not only that, but I also feel that it’s important to cherish a person’s creativity. After all, science is a creative field to a certain extent. Setting up projects and experiments is a great way to encourage learning, inspire, and show the vastness of the field to students.

Chemistry covers everything from maths to mixing chemicals in a lab. It involves equipment and technical knowledge, software development, computation, and calculation. Drugs are being invented, designed and made by medicinal chemists. Materials, imaging probes, pigments, DNA wires, and nanomaterials to name a few more – if something exists then the chemistry is there.

From experience, I do understand why teachers and parents might not be as keen to let teens carry out science experiments. The learning process can be messy and difficult – both physically and mentally. But then projects aiding in learning are not necessarily experiments. They can simply be demonstrations and explanations in different mediums. My aim is to share ideas for projects that will hopefully be fun for the students as well as for the educator.

While I have just stressed that practical chemistry need not be messy, if you’re not afraid to get your hands dirty, then you can definitely try out some of the more traditional demonstrations – preferably in an area that’s easy to clean! For example, two common demonstrations are the ‘black snake’ and the ‘carbon snake’ which are two different reactions.

The ‘black snake’ is done with sugar and sodium bicarbonate, whereas the ‘carbon snake’ is a reaction between sulfuric acid and sugar. Both produce a black foamy pillar or a ‘snake’, however, they are useful in explaining the difference in reactivity while introducing a bit of firework chemistry.

On a slightly less messy side, crystal growing can be attempted. Quite an opposite to the instant explosive chemistry demonstrations, this requires time and patience. Kits are available to grow large, colorful crystals such as Eastcolight Smart Crystal, but this can also be done simply with salt at home. 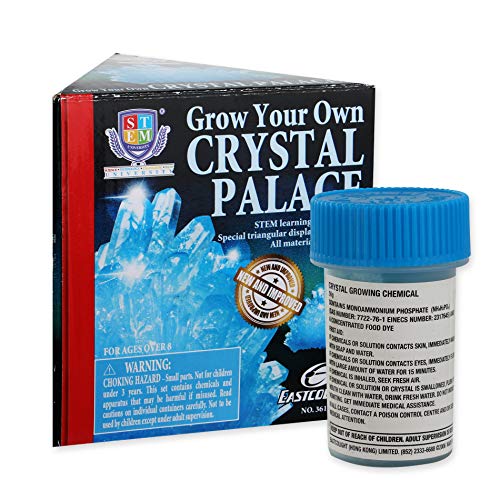 Crystal growing is a great introduction to crystallography, explaining intramolecular interactions and the importance of energy of the system. This project lends itself well to keeping a lab book, recording the procedures followed, as well as the conditions used for the growth.

In a classroom setting, it would be great to see who can grow the biggest crystal and what they did to achieve it.

If the mess is to be avoided altogether, there are also some dry lab projects available. Molecular modeling kits are quite easily available and are a piece of kit that can come in useful time and time again at any stage of education. Such kits are a great addition to almost any classroom where bonding can be visually explained and presented in 3D, instead of just flat drawings on the board.

As a project idea, a small set of atoms and bonds can be given (e.g. 2 x carbon, 2 x oxygen, 6 x hydrogen), asking the students to come up with as many structures as they can, recording the molecular formula, the 2D structure, and then researching the name and some facts about the molecule they just built. This backward approach of building first and learning later can be quite a bit more fun than starting with dry facts.

If powerful computers are available, then a dip into computational chemistry is the way to go. Software such as UCSF Chimera and GROMACS is free to download and use with plenty of tutorials available on the web.

Allowing students to play around with some of the software can be beneficial to their understanding of how molecules look and behave when simulated. Due to the relatively steep learning curve however, this is something to be treated as a project to be built upon over a longer period of time.

This works well with programming where students can learn to solve some simple chemistry problems, such as calculating the energy produced by a system using the first law of thermodynamics (Q=mc𝚫T), by building a simple script.

Chemistry? Artistry? Why Not Both!

For people who are quite creative and artistic in nature, you can set up art projects based on chemistry. It’s a common misconception that scientists aren’t creative. In fact, while much science requires the kind of creative thinking usually associated with more overtly “artistic” fields, many scientists and researchers are artists in their spare time – whether it involves painting, music, or performance. An interesting project combining art and chemistry would be to produce a piece of art but then write a little bit about it in terms of the chemical composition and the chemical interactions. For example, an oil painting answering questions such as: What compounds produce the colors used? How do the solvents interact with the pigments? How does the paint formulation work with the paper or canvas used?

Of course, different projects will be liked and disliked by different people – you can’t satisfy everyone. However, expanding the range of projects and letting students try out more than just bunsen burners hopefully will inspire some of them to research the field further and take up an interest in the subject.

With something as visual and exciting as chemistry, projects should definitely be encouraged – more project ideas available from this STEM Learning site.

Don’t be scared to reach out of the stereotypical scope of chemistry – projects that include ideas from other subjects would be best, showing that chemistry is linked to almost anything.

Do I need any special equipment to carry out chemistry projects at home?

Not necessarily. It highly depends on the project you want to try. While some things may be a good investment for the future, don’t feel the need to create a mini lab at home. If anything, you can always suggest a project to your high school chemistry teacher!

Aren’t some of the projects too difficult for a high school student?

While some projects are more challenging, and some students will struggle with some ideas, the point should be to expose them to a variety of information. This should be a learning experience rather than a test, where mistakes can be made and addressed.

Sylvia is currently doing a PhD in Computational Chemistry in the UK. When she’s not writing her thesis, Sylvia enjoys inspiring young minds at science festivals and she particularly enjoys making complex information accessible and easy to understand.

Ultimate Boredom Buster: 101 Things to Do When Kids Are Bored