It’s great to be the king, even if it is just a game. There are plenty of board games that give you the power to build features like cities and roads as part of an ordered kingdom or a sprawling countryside. In European style tile games, players build their empire as the game progresses.

Kingdomino and Carcassonne are both European-style tile games that share some of these features. Although the basic layout is different, with individual board games instead of sharing one, the basic gameplay is similar. Players select tiles or dominos and use a “meeple” to claim or build certain features and score points. There are still some profound differences between the two, even though they’re both a tile game.

In Kingdomino, players build individual “kingdoms” that fit into a certain size, usually five by five squares, but that can vary depending on how many people are playing. With Carcassonne, however, they must build a whole landscape shared between them and others. The more players in a Carcassonne game, the less time it takes to play. Both games are over when the tiles run out.

Both Carcassonne and Kingdomino have a lot to offer, but which is better for you?

Kingdomino vs. Carcassonne
Ideal for Newcomers

Differences Between Kingdomino and Carcassonne 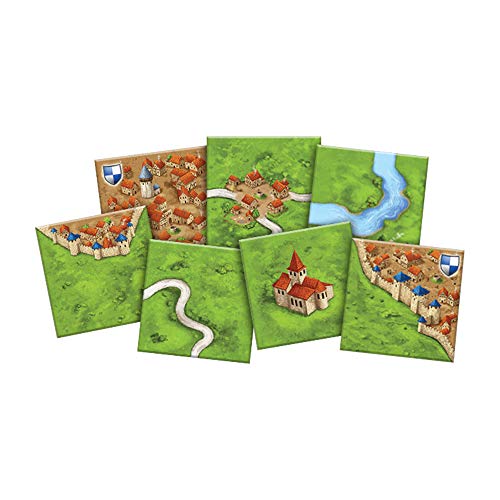 In a game of Carcassonne, both players build on the same landscape and compete for space. Players can build roads, cities and designate certain areas for farmland. Depending on the variation or expansions you’re using, the geography of a typical Carcassonne game can include cathedrals, monasteries, gardens, and even airports. Both games include a variety of features that denote how the players can use the land.

In Kingdomino, each player has their own individual kingdom that has to fit within a certain grid. Dominos include two distinct features that might consist of desert, forest, or wasteland, among others, with some marked with crowns to denote their scoring value. The castle tile, which is the king’s headquarters, is the dominant feature of the grid.

When playing Carcassonne, players can score during the game by building roads and cities. They can save some points for the end in the form of resources or unfinished cities. The scores in Kingdomino are only tallied at the very end and are solely determined by the value of the tiles used.

The dominos and tiles of both games are designed to fit in several different ways, but not every combination works, and some connections are worth more than others. For example, ending a road in Carcassonne means that you score points, but a player should consider the option of making that road even longer as a way to obtain a higher score. 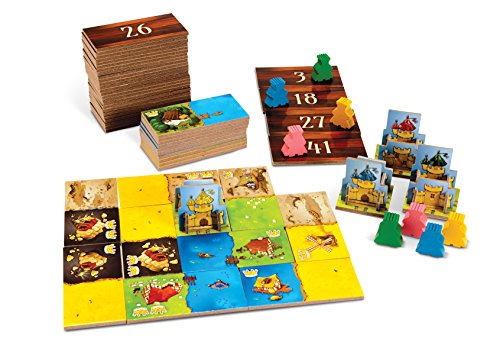 For Kingdomino, scoring points is more of a game of chance. Each king is chosen randomly to start a turn. When you start, you have access to the most valuable tile available. Even if a player does get a good tile, if it doesn’t fit in their existing kingdom, it must be discarded. There’s no penalty involved, just the pain of a missed chance.

There’s only one expansion for Kingdomino and it’s called the Age of Giants. It includes new challenges and allows for a different number of players. That’s great to keep it interesting, but if you’re ready to make an investment that will age with the kids and that will keep adults engaged, take a closer look at Carcassonne.

Carcassonne has several expansions that include everything from dragons to cathedrals to markets, and more. Most materials and features were inspired by the medieval strife of real European cities, such as The Catapult expansion. There’s also some fantasy in the form of dragons, magical portals, mages, and wizards for several others. This requires some investment, but there are some boxed sets and compilations if you’re looking for a bargain.

How to Decide Between Kingdomino and Carcassonne

Both games are ideal for the same age group, and the learning curve is also about the same for each. Learning the Kingdomino rules might be easier for children or those new to tile games. The pictures on the dominos are bigger, with more depth and detail, and are easier to understand when it comes to resources and scoring.

If you’re pressed for time and space is limited, Kingdomino is the best choice. The game takes up a relatively small space, and even four players can fit comfortably at an average coffee table. Even if you use all the dominos, it only takes more than 45 minutes to an hour to complete the game.

If you’ve got a few hours to kill, and the space equivalent to a billiards table at your disposal, try an ambitious Carcassonne game that includes an expansion or two. There aren’t any rules to how the landscape has to be constructed, unlike Kingdomino which requires a certain shape and size. In this case, Carcassonne allows for more creative but perhaps chaotic gameplay.

Each game takes less time, depending on the number of players. An extra player means more tiles and therefore, less time is required. Kingdomino is easily the cheaper option, but it has fewer possibilities for expansion and variation than Carcassonne. The expansion also costs almost as much as the original game.

On the other hand, Carcassonne is one of the higher-end games on the market, and even the Classic version without any expansions costs significantly more than Kingdomino.

The best option in both cases would be to purchase the base game initially and invest in expansions later.

How many people can play each game?

Two to four is generally agreed upon for each, but the games are flexible. In a two-player game of Kingdomino, each can use two kings instead of one. They play with a seven by seven grid instead of a five by five one.

What’s the difference between a domino and a tile?

A domino is a rectangular tile with two different features on the same side and one on each end. The other side is often blank, but it might have a design or a number. In the case of Kingdomino, the dominos are numbered as part of the gameplay.

The tiles used to play Carcassonne are square. They have a uniform pattern on one side, with one having the reverse pattern as the starting tile and a landform or city feature on the other side.

Is Queendomino an expansion of Kingdomino?

Queendomino is a totally separate game, but it’s very similar and made by Blue Orange, who also made Kingdomino. It’s compatible with the same expansions as Kingdomino, and it’s possible to combine two games into one.

Kristy Ambrose has been writing professionally since 2010. She dabbles in various genres, creating everything from short blog posts to serialized novels. She holds a Bachelor of Arts in English literature from the University of Victoria. Her favorite tabletop games are European-style tile games like Catan and Carcassonne. She also enjoys a sporting RPG game once in a while.