There are board games, and then there are tile games. These are also called German tile games because they were first developed in Germany or other parts of Europe. Instead of having the same fixed board for every game, the play area is made up of interchangeable tiles. The advantage of this is that no two games are ever the same.

Two of the most popular European-Style tile games are Carcassonne and Catan (the latter is also known as Settlers of Catan). They belong to the same family of games and share some similar features. Each game requires players to build cities, roads and collect resources, which are used to collect points. The player with the most points at the end wins.

These may appear to be simple games, but one reason they are both so popular is how sophisticated, complex, and nuanced they actually are. In addition to their various unique features, the games are highly customizable and flexible, allowing for longer or shorter gameplay and more or fewer layers. Strategy, planning, and predicting your opponent’s moves are also a part of who rules the game of tiles.

Both Carcassonne and Catan have a lot to offer, but which is the better one for you?

Differences Between Carcassonne and Catan

The complete, original Catan, which you can also find by searching for the more vintage name, Settlers of Catan, includes more features for less money compared to Carcassonne. The base game of Carcassonne, which means the classic game without any expansions, is more expensive than the base form of Catan and doesn’t include features that Catan already has.

For example, resources and markets are a part of the basic gameplay in Catan. In Carcassonne, the only resource is the farmer unless you invest in the Traders and Builders expansion.

The price difference is marginal but for those on a budget, it’s something to consider. For those interested in Carcassonne but have a limited budget, it’s possible to start with the base game and purchase expansions or mini-expansions separately.

Building The Board Game

The biggest difference between Carcassonne and Catan is how the board is put together. The first and most obvious difference is the shape of the tiles. One game has hexagon-shaped tiles and the other uses squares. The tiles are all designed to fit together, although the forms they can take vary. Each game shares a common rule that once a tile is set, it cannot be moved. 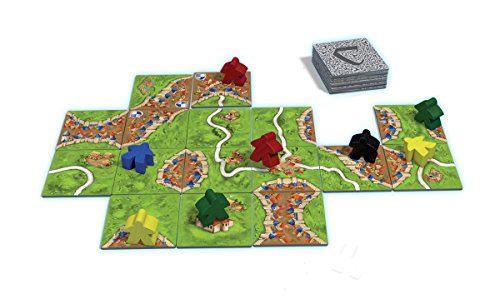 Carcassonne uses square tiles that two or more players arrange as the game progresses. This begins with a specially marked starting tile. Several expansions can augment this, The River being one example, that’s often included with boxed sets of the game. Players choose from a set of tiles, often hidden in a bag or a box, and continue to build roads, cities, farms, and other features. Other accessories like cards and dice are not a part of the game. 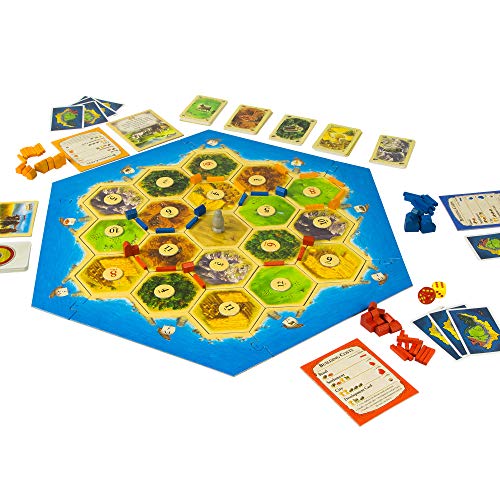 Catan, or Settlers of Catan, has a different set-up that can accomodate two players, but much more commonly includes three or four. This initial setup doesn’t really change depending on the expansion, as the rest of the game depends on the predetermined board. To begin, the hexagonal tiles are shuffled and placed within a set area, creating a unique landscape for every game. Players then have to place their settlements and roads strategically to take advantage of those resources. A set of dice determines which hexagon players use that turn and players draw cards to determine their next action.

Number of Tiles and Scoring

Classic Carcassonne has 72 tiles, and there are various expansions available that can introduce many more. Most boxed sets of Carcassonne currently include an alternative way to start building the landscape along with the regular starting tile.

Players can score points using cities or roads throughout the game. Farmers are used to claiming pastures with cities, and these points are saved from being counted at the end. There’s no limit to the points a player can have, and most Carcassonne box sets include a cyclical scoreboard. It’s possible to play a quick game with three people and 72 tiles, but two players using several expansions can play for hours and rack up hundreds of points. A Carcassonne game ends when the tiles run out. A possible variation could be a point cap if you’re pressed for time, but that’s not in the official rules.

The gameplay of Catan is considerably different. The game area is set from the beginning, so players can’t score points by laying tiles like they do in Carcassonne. Instead, the focus is on how to use the tiles as they’ve already been placed. Towns that are developed into cities are one way to score points. The first player to score ten “victory points” wins. This typically takes an hour with four people playing. These points are acquired by building cities and trading resources.

How to Decide Between Carcassonne and Catan Each game is expandable in various ways, allowing you to customize the gameplay depending on your group. Simplify the game to accommodate younger learners by lowering the point cap. Make a challenge for older or more experienced players, like who can build the biggest city. Set up a game for a mixed group in a party setting and put players in teams.

There are more than 30 expansions available for Carcassonne, putting it well-ahead of Catan when it comes to official customization options. Some of these expansions for Carcassonne are required to play with features that already exist in Catan, such as the ability to trade and collect resources. Traders & Builders, for example, is the expansion that includes resources like wheat and cloth so you can raise the stakes with cities for more experienced players. The expansion Bridges, Castles and Bazaars allow players to trade resources as they do in Catan.

Catan shouldn’t be discounted in the expansion category, however, several creative options include pirates, space travel, and even one with a Game of Thrones theme. In an echo of Carcassonne’s real-life roots in southern France, there are also several historically-based expansions for Catan, including early American settlement and the rise of Meso-American empires.

Both of these games are recommended for the same age group. However, it’s important to note that the learning curve for both games isn’t the same. One allows more freedom at the beginning of the game to create and build while the other has a structure that’s more about strategy from the outset.

Catan includes many numbers, cards, dice, and a predetermined gaming area, while Carcassonne starts with only tiles and “meeple,” the nickname used for the small wooden figures in the game.

Carcassonne, in its earliest and most basic form, is ideal when it comes to teaching younger players the basic rules of tile games. Kids can experiment with tile placement and integrate abstract features like farmers into the landscape, which is a nice introduction to interpreting the nuances of a static game like Catan. Instead of trading resources in a marketplace type atmosphere, Carcassonne focuses more on blocking or stealing resources. Players can use meeple to claim unfinished features like roads and cities at any time, while in Catan, you have to wait until a certain dice roll that corresponds with a tile before you can use anything on that tile.

How are resources used in Catan as opposed to Carcassonne?

The Classic version of Carcassonne doesn’t include a wide variety of resources. In fact, it only includes one, the farmer. This isn’t even a separate piece, but a regular meeple turned on its side. In Catan, resources are a central part of the game. Resources are used to build cities, which are then used to acquire victory points.

Which game is more historically accurate?

The island of Catan is a fictional place, but Carcassonne is a real French city located close to the Spanish border. The game was inspired by the walls and castles that still dominate the medieval skyline.

How many players can play each game?

Catan is typically played with three to four people, while two or more can play Carcassonne. The more people are playing, the less time each game takes. Expansions are available that include extra tiles or more resources to allow as many as six players. Carcassonne is the more flexible of the two in this regard.

Kristy Ambrose
Kristy Ambrose has been writing professionally since 2010. She dabbles in various genres, creating everything from short blog posts to serialized novels. She holds a Bachelor of Arts in English literature from the University of Victoria. Her favorite tabletop games are European-style tile games like Catan and Carcassonne. She also enjoys a sporting RPG game once in a while.

Best Quadcopter with Camera for Beginners in 2020

Aeronautical Engineering
Didn’t find what you were looking for?
Browse Categories
Disclaimer