If you’re reading this article, you probably already know what Catan is and have a question you want to be answered: what are the strategies that’ll let me win at Catan? Is there such a thing as the best Catan strategy? I hope that this article will answer that.

But first, let’s have a quick overview of the game.

Catan (originally “The Settlers Of Catan”) is a groundbreaking tabletop board game that was released back in 1995. It combines multiple gaming mechanics such as trading, building routes, managing resources, and of course, dice rolling. It’s a game that’s simple enough to pick up, learn, and play but deep enough to be a challenge for even veteran tabletop players to master. 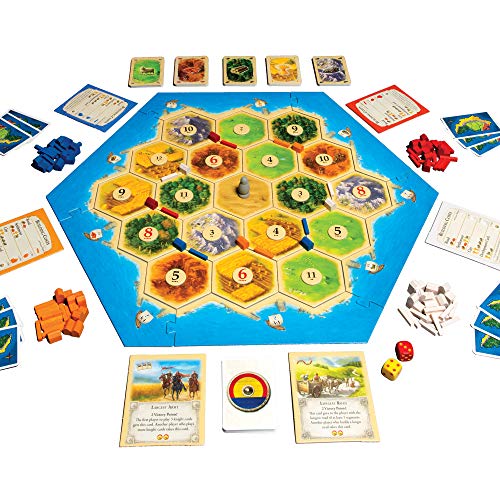 Take risks but don’t be reckless

Catan is a board game that uses dice and as such, there’s always going to be a bit of randomness to the game. Each of the hexagonal resource tiles in Catan will have a round chit put on top of it and that chit will have the number you need to roll in order for your adjacent settlement to get it as well as a number of dots that shows the likeliness that you’ll get the resource. The higher the number of dots, the more likely it is that you’ll get the dice roll you need to get it.

Use the dots to take calculated risks in order to get the resources you need!

On the other hand, you should make safe bets as well to balance out your riskier moves. For example, going after the Longest Road tile that gives you two Victory Points as long as you have it. You get the Longest Road tile by building seven contiguous road segments and keep it by maintaining the longest road till the end of the game. Another relatively safe bet is getting the Largest Army tile which you get by having the most soldier cards in the game.

Always be on top of things when trading

There’s good reason why Catan took our top place for Best Game for Interaction in our guide to the Best Educational Board Games – trading is very important! Catan is, after all, a game and the goal is to win, and in order to win you need to be cutthroat. If you trade with other players, try to trade at high ratios like 2:1 or 3:1. For example, you trade one of your resources for three of theirs. This may seem cutthroat (because it is) but you need to play this way to maximize your chances of winning the game.

Other players who are desperate for certain resources most likely need them in order to secure the last Victory Points that they need to win the game. If they’re desperate enough to trade at a ratio of 3:1 or higher then this is almost certainly the case. Make sure you put a premium on the resources your opponents need!

Claim a monopoly over everything you can

At the beginning of the game, try your best to think strategically so that you can place your settlements in such a way that other players are cut off from a resource that you monopolize. At the start of the game, ask yourself are there two of the same resources side by side and if they are, is the numbered chit on one of those resource tiles decently high?

Execute this strategy well and you’ll be the only one with access to certain resources during the game. You can then either trade the resource you have a monopoly on at high ratios or just flat out deny other players access to it.

Use the Development Cards wisely Development Cards are the only real unknown variable in Catan. You buy the Development Cards then place them face down and hidden away from other players until you decide to make use of them.

Development cards make other players worry about what you have hidden and what your next move is going to be. The cards themselves vary in usefulness but they’re all helpful. They run the gamut from “Knight” which allows you to move the robber, to “City Building” cards that are worth 1 Victory Point each.

Manage your resources well so that you can gain access to as many Development Cards as you reasonably can!

Use foresight in the endgame

Use a bit of foresight early on or in the middle of the game to ensure that you’re able to secure the final Victory Points that you need for the win. Plan ahead about exactly how you’ll get your Victory Points and what exactly you need to do to get them. You should start planning ahead from the start of the game but you really need to use foresight in the middle of the game to predict what other players are going to do and play accordingly.

Think about these things ahead of time to ensure your victory at the very end. 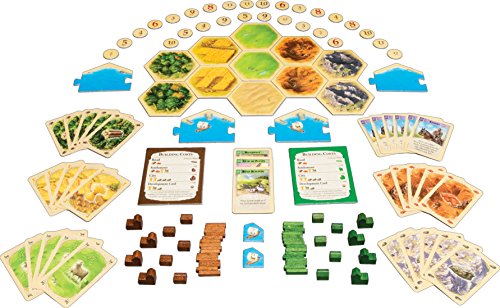 Catan Extension - 5-6 Players
If you'd like to extend your Catan experience beyond 4 players, you'll need this.
Check Latest Price

Is Catan a good game for beginners?

Yes, it is! Catan is simple enough for beginners to pick up, learn, and play almost immediately.

Is Catan a fun game for veterans?

Yes, to this as well! Catan has enough depth for veteran players such that they won’t get bored playing it. Catan is easy to learn but hard to master, as people say.

How long does a game of Catan take?

A game of Catan takes anywhere from an hour to two hours to finish. Games usually last 90 minutes on average though.