3D pens are one of those new, cool toys that every child has to have. Odds are, your daughter or son has begun pestering you for one of these new pens. Luckily, you can feel good about purchasing your child one of these crafty pens because of the STEM skills they teach.

Let's not forget STEAM too! Apart from introducing your kid to the magical world of 3D printing, these toys are also excellent for flexing their creativity.

If we had to pick a favorite, we're definitely torn between 3Dsimo Basic 2 and 3Doodler Create+ 3D Printing Pen because both of them come with the colors we've been looking for. The former offers great functionality for a reasonable price, and the latter is probably the most popular pick worldwide. And for a reason – scroll down to check it out in its full glory!

MYNT3D Super 3D Pen is a great introductory 3D printing pen for all ages, all experience levels, and frankly, all wallets. You can use it to dip your toes into 3D printing or to create full-blown models that you can even sell or proudly showcase as home decor.

Furthermore, it's among the easier ones to learn. It comes with plastic ABS filaments in three colors, but there are a bunch of refill packs on the market that you can buy for cheap. Whether your child wants to build a house for their dolls, or a replica of the International Space Station, this pen can pretty much do it all.

So why exactly are we recommending it for all ages?

Because it works by push of a button. Watch for the two lights on the side, red and green. When the pen is on (but not heating), it flashes red. When it's heating (and done heating), it's green. Ready for some doodling? There's even a slider to adjust the speed according to your needs and skill level. 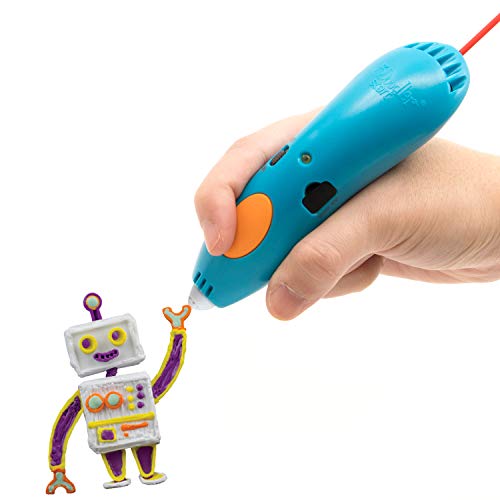 If you’re buying a pen for a younger child, 3Doodler Start 3D Pen is definitely a good option. It comes with absolutely no hot parts, so there is no reason to worry about burns. Plus, it uses only the safest filaments available. This company also has a free app with step-by-step instructions. Great for getting a kid’s creative juices flowing!

There is only one speed and one temperature. That makes it more intuitive and accessible for smaller children and those who aren’t very technologically savvy. There is only one button as well, so your child doesn’t have to stress out over pressing the wrong thing.

All they need to do is plug in the pen, insert the filament, and press the button. It is indeed one of the easiest pens to use on the market.

3Dsimo Basic 2
An amazing product made in Europe. Comes with a whopping 48 colorful, eco-friendly filaments!
View on 3Dsimo

There's a whole host of skills a child of 8 and up can learn by using 3Dsimo Basic 2. It's not only about early exposure to 3D printing, but also about fine motor skills and creativity.

You won't notice this 3D pen on popular shopping sites, but it's nevertheless a great product that deserves an honorable mention on our list. 3Dsimo is a European startup based in the Czech Republic, and its first international distribution started with no less than Japan! They are making not only 3D pens but also full-blown handheld workshops that can even solder, burn and cut besides drawing.

Better yet, they live by the open-source philosophy, which is widely admired and contributed to by all STEMthusiasts, yours truly included!

Back to the pen. Unlike some other models we've had a chance to review, it doesn't use high temperatures to melt the filament. That's what makes it exceptional for younger kids. You'll get 48 filaments made of eco-friendly materials, and a battery that won't run out of juice for up to four hours! Loads of uninterrupted fun for the kiddo.

The only downside we're aware of is that shipping may take a bit longer. It's understandable too since the product doesn't travel from a warehouse next door!

3Doodler Create+ 3D Pen for Teens
Very powerful and advanced, this pen is great for teens, their parents (and yours truly).
Check Latest Price

If your teen isn't very confident about their artsy-craftsy skills, this pen will still cut it. There's a bunch of stencils they can use until they grow enough confidence to start improvising. Apart from “building” structures such as Eiffel Tower, International Space Station and whatnot, your teen can also use their 3D pen for making jewelry or fixing things around the house.

A whopping 15 filaments of different colors will make sure there's enough material for just about any project. Make sure to download their app too, which is packed with tutorials, instructions, and brilliant project ideas.

If you're one of those parents who like to “borrow” a toy now and then, no worries! Adults can use it too.

And that's claimed and confirmed by the manufacturer, absolving you of any guilt you may have. This is a serious artistic tool that can also make a wonderful gift for your friends. 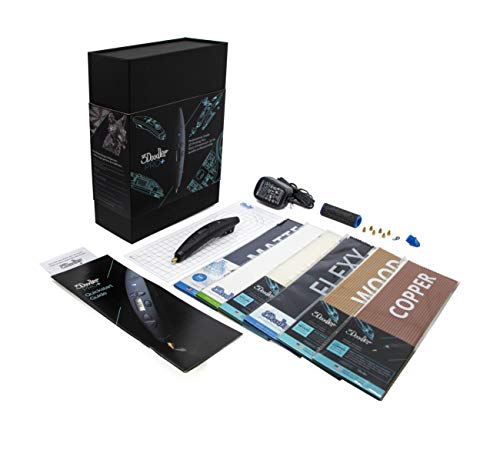 It wouldn't be fair not to include a high-end model for teens and adults who have already gotten into 3D printing (or 3D penning)!

Released only last year, 3Doodler PRO+ 3D Printing Pen is the most powerful model on the market as of this writing. Whether your kid is a budding designer, architect, or simply a passionate maker, this pen will go over and beyond anything they can imagine.

You can control almost everything, from temperature to speed to the fan. A unique feature is that it doesn't only work with plastic but also wood, nylon, and even metals such as copper and bronze.

All of these filaments are already included in the package. Of course, you'll also have to buy refills from time to time, which are on the costlier side. But that's expectable for such a high-end model!

Note, however, that you shouldn't get this 3D pen for a first-timer, especially if they are under 14. The tip can get super hot, so it's important to have some experience and routine up your sleeve before starting to work with this tool.

Will you get a crafty 3D pen for your kid? 3D pens are an excellent, hands-on way for children to learn about engineering concepts and develop problem-solving skills. After all, getting all that filament to build what you want it to is often harder than it looks. Introduce the idea to your kids and see if they have the potential. You'll never know how awesome these pens are, unless…?

A 3D pen is a pen shaped device that extrudes heated plastic through a nozzle, allowing users to ‘draw' 3D dimensional objects.

How do 3D pens work?

3D Pens include a heating element that warms a plastic filament, which is pushed through an extruder at the tip of the pen. Once outside the pen, the plastic quickly cools down and solidifies. The solidified filament is quite stiff and retains the shape it has been formed into.

What plastics can be used with 3D pens?

3D Pens generally use the same types of thermoplastics used in 3D Printers. Depending on the pen, PLA and ABS are two of the most common plastics. Some pens can use either filament type.

Are 3D pens safe to use?

Manufacturers of 3D pens need to meet government regulations regarding safety. Heating surfaces are not generally exposed to the user. The two most commonly used plastics are generally regarded as safe to use. ABS is used in LEGO bricks and PLA is a non-toxic biopolymer made from natural sources like cornstarch.